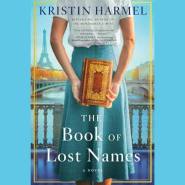 In 2005, Eva Abrams sees an article in the New York Times seeking the owner of a rare book that had been looted by the Nazis. Eva knows it’s her book that she’d thought was lost long ago, and that it contains a secret she’s waited 60 years to find. With single-minded purpose she books a trip to Berlin to claim it, hoping it might contain a message from her long lost lover who died in 1944.

From Florida 2005, readers are taken to 1942 Paris where we’re introduced to Eva Traube. She and her parents don’t believe there’s going to be a roundup of Jews but, when her father and thousands more are taken, she and her mother escape to Free France where they planned to continue on into Switzerland. Instead, against her mother’s wishes, she becomes involved with the French Resistance. In the hidden library of a Catholic church her artistic skills are put to use forging identity documents for hundreds of Jewish children escaping to Switzerland. There she and Rèmy, a fellow forger, develop a secret code based on the Fibonacci sequence and use a rare book to record the real names of the children to whom they were giving false identities.

Through flashbacks between the past and present readers learn of the difficulties Eva faced by falling in love with a Catholic, the battles she had with her grieving and bitter mother, and the hard work she did to save the lives of many children. We see the ways in which the Catholic church was involved in saving lives, the love she held for Rèmy, and how she’d hidden her true self for many years. It is a story of love, hope and faith, in the midst of despair, that rings true to its time and place.

I received a digital advance reading copy of this book from the publisher in exchange for an honest review.

It’s Elspeth and her twelve-year-old son Caleb against the world of 1897 after three men killed her four children and husband when she was away from home. Only Caleb survived so, bonded by revenge, the two of them struggle through the wilderness seeking the nearest town. There Caleb gets involved with the local gangsters while Elspeth tries to survive the guilt she feels, knowing she was the reason her family was killed. Both she and Caleb have to control their demons if either expects to reach closure.

I was not a fan. The book meandered too much, and many questions weren’t answered. What was Elspeth and Jorah’s relationship in the beginning? Why did her father beat her so terribly if all she said was hello? I especially did NOT like the ending because, after taking readers through a convoluted path to get where Caleb and Elspeth finally arrived, why end the book so openly? These were just a few of my disagreements with “The kept.”

So, though I didn’t like it, I will leave it up to you Adult readers to decide if you want to read it or not.

Eleven-year-old Viji and twelve-year-old Rukku’s mom was abused by her husband, but always believed him when he said he was sorry. Viji knew Rukku had special needs, and had always taken care of her older sister but, when her father hit them in a fit of rage, she knew they’d have to run away.

With nowhere to go and only a bit of money, they bus to the city where Rukku becomes attached to a homeless puppy, and they become friends with two homeless boys living on a bridge. There they build their own ramshackle tent, and the boys help her forage for recyclables in stinking trash dumps with other homeless children that they sell for pittances.

Hunger dulls their strength but, as time passes, the four forge strong bonds of friendship. Though they wind up living on a grave under a tree in a cemetery after marauding men destroy their home on the bridge, Viji tries to keep believing in her dream of becoming a teacher. Each day of looking for food in trashcans, and hoping to earn money on the dump, makes her dream seem impossible.

This moving story, based on real children’s first-person accounts, is an eye opener for many who might be unaware of the plight of over 1.8 million children living on the streets of India, working and eating from its many garbage dumps while trying to avoid abuse and slavery.

In 1544 Portugal José, his rich aunt Doña Antonia, and his cousin Reyna find themselves caught up in the “Death by burning” of six Jews condemned as heretics in the Portuguese Inquisition. Deeply moved José tries to get involved, but his aunt forcibly restrains him. Later she reveals that they’re Jewish – including the parents he’d never known. Stunned by the knowledge his aunt had kept secret for so many years, José dedicates himself to learning everything he can about his Jewish faith.

When it’s discovered that the family is Jewish, they’re forced to run for their lives. Eventually they arrive in Istanbul, where the reigning Sultan allows Jews to safely worship. In time José marries Reyna. Their child Tamar falls in love with the Sultan’s son, but José is unable to bear the thought of her marrying outside of the faith. He banishes her to an unsettled land, allowing everyone to believe she died from a fever. With that act a curse is placed upon his ancestors that isn’t broken until centuries later when readers are introduced to the last Sultan of Istanbul.

Reading how all the generations since José were tied together, of loves lost and found, and learning about the Ottoman Empire was fascinating. I was glad the Sultan allowed his land to be a place of refuge for the Jews when other countries were kicking them out. It’s too bad that goodwill between the two countries has been deteriorating in the past few years.

When his parents planned a trip and left him in charge of his little sister Emma for the night, fourteen-year-old Troy expected to pig out on junk food, and binge watch TV. What he didn’t expect was to be rudely awakened by his dog. Though it was just 9:15 in the morning, everything was smoky dark due to an oncoming fire.

Troy knew their only route of escape was for him to drive his father’s Bronco, even though he didn’t have a license. He manages to get his sister, dog and cat on the road, however, traffic is barely moving and the fire is coming fast. With split second timing Troy will have to figure out the safest and quickest route to freedom if he wants them all to survive.

This book was a very quick read, with short, cliffhanger chapters. It’s a good choice for reluctant readers, especially boys. There are some references to God, faith and prayer, but they’re not enough to turn this into a “Christian” book. I see it as an adventure/survival story, not a “Christian” adventure/survival story. This “I escaped” series seems very similar to the “I survived” series, written by Lauren Tarshis.

I received an e-copy of this book from the Publisher in return for an honest review.

A six-year-old who sees people’s souls is chased by “bad men” after they murder her mother. Churches are blown up across the country. A teen hacker plans the release of a virus so powerful it will bring China to its knees and cause the release of nuclear warheads from the United States and Russia. Police are kidnapped and murdered. Someone plots the demise of the planet through nuclear warfare – but only on the Northern Hemisphere. Through it all, faith in God will pull you through.

Yes, ALL of these play out on the pages of this book. Though filled with too many details about things not relevant to the plot, the book shows some promise and managed to keep my interest for a little while. It was frustrating that Grumley left so many unanswered questions. Some of my questions for him are: If Zahn was Ryan’s guardian, why did he act so menacing towards him and his father? Who was bleeding in the hallway when Sarah’s mother was killed? Will the detectives ever be found? Why did Rand have a black shadow? Why did it consume Zahn? How did Sarah know about Zahn’s history and how God felt about him? I have many more, but these are a start.

Normally I don’t review self-published books, as too many authors don’t use the basics of spell check, and have bad writing skills. However this book had some promise. I suggest Grumley get a good editor who can help him whittle through his ideas and decide on a main theme. This will allow him to focus on fleshing out specific ideas so as not to get caught up in too many plot twists that will cause the main storyline to get lost. Ultimately readers will not be left scratching their heads wondering what just happened.

Not recommended due to many unanswered questions.

Evangelina lived with her parents, brothers, sisters and grandfather on her father’s ranch in Mariposa Mexico, which had been in the family for generations. She was looking forward to turning 15 in a year and a half so she could also celebrate her quinceañera, like her big sister. Everything about her life seemed to be going well, until the politics of 1911 turned everything upside down.

Due to the fighting that had begun with the Revolution, Pancho Villa and his soldiers roamed the countryside, robbing and killing villagers, Evangelina’s parents decide it’s too risky to stay in Mexico, so Evangelina had to leave her home and everything she loved, including her grandfather. It took days to travel to a small border town in Texas to live with her aunt but once there, the family found out they weren’t welcomed because they were Mexican.

Through the trials and tribulations she endured at school and at the hands of prejudiced villagers, Evangelina gained the courage to spread her wings and fly free as a butterfly, despite those who wanted her to crawl at their feet like a caterpillar.

I enjoyed learning about the Mexican Revolution from the eyes of a family who was living it. It was sad to read how Mexicans were treated in Texas and other states, even though they had been part of Mexico before the Mexican-American War. When settlers from the United States moved into these new states and took over land previously owned by Mexico, it was the Mexicans (the original inhabitants) who lost the rights to their ancestral homelands – just as what had happened to the Native Americans.

Attitudes towards Mexicans and other foreigners are, unfortunately, still alive today. Despite having to flee their homes due to war, gangs and other types of violence, many are not met with acceptance when they arrive in the United States. I loved what Evangelina said on page 111 when she asked, “Why do people in town glare at us so hatefully if they’ve never even met us? What would they do if the war was in Texas and their sons and daughters and fathers and sisters were being kidnapped and killed?”

I have to get on a soapbox to say that people need to put themselves into the shoes of others, and stop being judgmental. As I’ve said time and again “no one is an original American except for Native Americans, so think about where YOU would be now if your ancestors were kept out of the country the way you’re trying so hard to keep others out.” Think about it really hard.

I received a copy of this book from the publisher in exchange for an honest review.