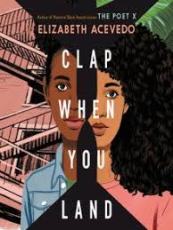 This novel of verse is dedicated to the memory of the 265 people killed when AA flight 587, headed to the Dominican Republic, crashed into a Queens neighborhood on November 12, 2001. Over 90% of the passengers were Dominican. I lived in New York at the time, and remember vividly how this loss shocked the city so soon after the losses of September 11th.

Sixteen-year-old Camino lives in the Dominican Republic with her aunt. Her mother died when she was six, and her Papi lives in New York but visits every summer. After he’s killed in a plane crash Camino is beset with grief and worries for her future. Papi paid for private school, but what will happen to them without his monthly checks? When she finds out he has another daughter in New York City Camino is angry because Yahaira had led a rich life while she has to struggle. However, though that girl stole her father, she’s also her sister.

In New York City Yahaira’s father is killed in a plane crash, but sorrow is mixed with anger because she’d found out a year earlier that he had another wife in Santo Domingo. When she finds out he had a daughter there too she’s angry that this girl stole her father, but is happy to have a sister. Against her mother’s wishes she’s determined to travel to the Dominican Republic to meet her new sister, Camino.

In alternating voices, Yahaira and Camino tell their stories of grief, loss, love, discovery and forgiveness as the beauty of the Dominican Republic, and the love its people have for their country, is clearly verbalized. Once again Acevedo weaves a story that will keep readers glued to their seats. I finished it in just a few short hours, feeling a great affinity for all the strong women described in its pages. I won’t be surprised if this book wins a few more awards for its author in the 2021 ALA Youth Media Awards.

Highly recommended for ages 15 and older.

I received a digital copy of this book from the publisher in exchange for an honest review.

Ever since they were younger, Sloan and her twin brother Penn travelled to Hawaii to spend the summer with their mother and her husband. The summer before her senior year, Sloan found out her best friend Mick slept with her boyfriend Tyler. Sloan refuses to respond to any of their apologetic texts, emails and phone calls, and escapes to Hawaii to forget about their betrayal.

Sloan soon falls for Finn, the extremely handsome brother of her young swimming pupil. When he’s around, she forgets everything – including her own individuality. As she and Finn begin to draw closer together, her feelings for Tyler and the situation with Mick threaten to undermine her new relationship. Realizing she is the only one who holds the key to her happiness, Sloan will have to make decisions that will forever change her mindset and her life.

Schneider’s in depth look at teenage pain, friendship and heartache will hit a cord with her young readers.

Recommended for ages 14 and older.

Otis was a scared thirteen-year-old when Dara rescued him from himself. After losing her arm in a shark attack, which ruined her swimming career and killed her Olympic dreams, Dara found new hope in Otis. He helped her forget her father’s disappointment, her mother’s death, and what a one-armed life entailed.

At that time his best friend Meg, the love of his life, had just moved away and his three-year-old brother Mason had just died. Therapy wasn’t helping him come to terms with his grief, until Dara’s fierce coaching and swimming lessons gave him a way out of the drain he’d been circling. Over the years they developed a great relationship, forged through pain and understanding, while he developed into a championship style swimmer.

Though three years had passed, Otis never stopped thinking about what life would have been like if Mason had not died and if Meg had stayed. When she suddenly sent a text saying she was returning to town for a short period, Otis was beside himself with joy, fear, hope and various other emotions. Thinking of her reminded him of Mason, which brought its own kind of pain, while wanting to know why she abandoned him and if she still loved him brought its own heartache.

Through humor, angst, and guy problems, Otis tells his coming-of-age story. As we learn of the death of his hopes and dreams, along with Meg’s and Dara’s, Garner’s title and the definition of phantom limb pain become intermingled. Though only one actually lost a limb, all suffer from this pain, making for a very interesting read. In fact, it was so interesting I read it in one sitting.

Highly recommended for ages 14 and older.

Seventeen-year-old Clare has a terrible secret. Her family skeleton is so bad; he haunts her every waking moment because he knows everything about Luke, her drug addicted older brother who has been in and out of prison his whole life. Unfortunately, so does everyone in her small town.

As the years go by, her brother Peter seems to always be angry at her, while she and her parents continue to believe Luke can do no wrong. It takes years for Clare to realize her family has problems.

Despite what she wants to believe, Luke has some very serious issues. If she wants to help her family, Clare will have to make decisions that will not be popular but will help her not to drown in the uncertainty of her life.

“Learning not to Drown” is a very powerful read. It will go a long way towards helping readers understand how one person’s behavior affects another for many years.

Hayley Kincaid and her veteran dad have been traveling across the country in his truck for years as he home schooled her and they evaded reality. Life was good, despite the fact he suffered from PTSD from his time in Iraq and had many bad days and nights brought on by drugs, drinking binges, and flashbacks. After settling down in her grandmother’s old house during her senior year so she could go to a real school, Hayley was hopeful her dad would get better. Instead he deteriorated even more, necessitating a constant cycle of lying to the world and herself about his behavior.

Little by little, parts of her own soul began to be cut away by her dad’s binges along with the return of the stepmother she hated. While teetering on the edges of sanity, Finn entered her life. Not exactly a heartthrob, his silly antics and banter helped keep her mind off the seriousness of her home life and made her feel a ray of hope through her despair. Unfortunately even Finn couldn’t keep her father’s PSTD from worsening as his self destructive path seemed to be leading in one direction. Haley and her dad would soon find themselves in the biggest fight of their lives.

Laurie Halse Anderson’s realistic portrayal of Hayley and her father’s struggles with PTSD sheds a new light on what soldiers go through when they return from their service to the nation. Reading it may cause some of her readers to seek the help they need for their loved ones.

On a side note there were many editing errors that will, hopefully, be corrected in future editions.

Recommended for readers aged 14 and older.

Kasienka and her Mama immigrate to England from Poland to find her father (Tata). Tata walked away from them and never returned, but her mom is sure she’ll find him. Every day, Mama forces Kasienka to go with her to knock on stranger’s doors, hoping Tata will be behind one of them. Twelve-year-old Kasienka hates the daily, useless routine, and soon begins to hate both Mama and Tata for forcing this life upon her.

Tension builds between Kasienka and her mom, as Mama’s bitterness turns to blame, leaving Kasienka to fend for herself. Facing daily bullying at school, Kasienka escapes to the pool to swim. Her time at the pool, along with her crush on eighth grader William, allows her to face her present, her past, and her future.

“The weight of water” is told in verse, and is a quick read for reluctant readers aged 10-14. It is also a good choice for book clubs as the issues of how immigrants are treated, along with school bullying, are important topics to discuss.